The latest development in this neverending circle of parent-child conflict is Ignore No More, a new $1.99 Android app that allows parents to lock their kids’ phones from afar if they’re ignoring calls, with a password of the parent’s choosing. After the parent does so, the only way that the kid will be able to unlock his phone is to call the parent and ask for the password.

The applications are obvious. Say your teen claimed she’d come home at 5 p.m. but is nowhere to be seen. You, a concerned parent, call to see if she is OK (or perhaps to scold her). Before Ignore No More, the teen would’ve just muted the call, returned to whatever teen activity she was partaking in, and later made up an excuse that she didn’t hear the phone ring.

“It was on Silent mode!” she would protest, skulking up to her room.

But now the parent can remotely lock her phone with this app. She’ll be unable to access any of the things that are imperative to keeping abreast of her many digital social circles. She’ll have no one to call but you — or 911.

The app, according to CBS New York, was created by Sharon Standifird, a mom who was fed up with being digitally brushed off by her teens. After coming up with the idea, she researched how to code an app and then spent months working with developers to bring it to reality.

Her son, Bradley, is only half-proud of his mom. “Um, well, I thought it was a good idea,” he told CBS. “But for other people, not me.”

Here’s how it works:

The app will ask for your basic information. This will be the only account you need to use across the family. Don’t share your login information with your teens, as they will swiftly find a way to disable the app.

2. Find your kids’ phones and download Ignore No More once again.

Yes, this means the app will cost $1.99 per phone you want to use it on. Not the cheapest solution, but a solid one! Launch it and log in with the same information you used to create the original account. You’ll get a screen that asks if you’re setting it up for a parent or a child. Unless you’re imposing parental lock authority on your spouse, you should select Child. 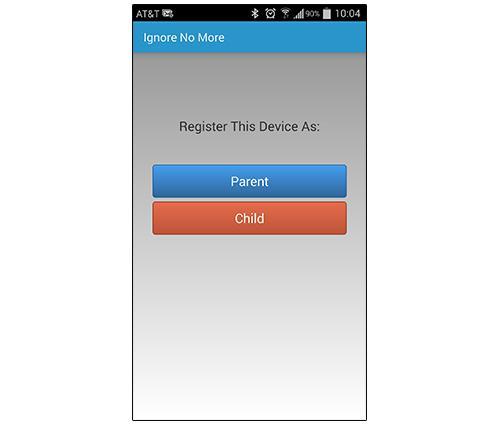 The Organic Conservative© 2023.
All rights reserved.